I am a PhD Candidate in Sociology at UC Berkeley.

I am a political and historical sociologist working at the intersection of society and space. My work unpacks relationships of power and knowledge, and the political, economic, and material landscapes they are embedded within. This line of inquiry has led to research in multiple contexts, from historical studies of American state formation, to housing struggles in the present day San Francisco Bay Area, to questions of power, culture, and knowledge in social theory.

My dissertation research uses large scale infrastructure projects such as the Erie Canal and first transcontinental railroad to investigate the role of space and territoriality in American political development. In my work, I reveal the way in which dispossessed Indigenous lands, as the “public lands” were woven into American public finance and the centrality of territory management concerns–such as infrastructure promotion–in American state formation. Through the case of the first transcontinental railroad, I also ask how American political institutions accommodated (or not) the contradictions of territorial expansion and development. In doing so, I theorize the United States as a case of settler colonial state formation and analyze the United States within its broader historical and international context–as a simultaneously postcolonial and settler colonial republican nation that would become a global superpower in the twentieth century–and the contradictions this generated. In other work, I use the history of infrastructure promotion in the United States to examine the origins of infrastructure-led development as a 20th and 21st century governmental rationality.

I am also an active public sociologist. Since 2015, I have worked closely with the Anti-Eviction Mapping Project (AEMP). Inspired by feminist and decolonial epistemologies, AEMP produces data, maps, and analyses with communities fighting for housing justice instead of about them. This work has resulted in, among other publications and projects, a collaboratively published book, Counterpoints: A San Francisco Bay Area Atlas of Displacement and Resistance (Oakland, CA: PM Press, 2021).

I also express my commitment to public sociology through my teaching where I seek to empower my students to be socially engaged and critical thinkers. My teaching has been recognized by awards from both the Graduate Division and the Berkeley Undergraduate Sociological Association.

My work has been supported by the National Science Foundation, the San Francisco Arts Commission, the UC Berkeley Global Urban Humanities Initiative, the UC Berkeley Institute of Governmental Studies, and the Tobin Project. My research and writing have been published in ACME: An International Journal of Critical Geographies, the Berkeley Journal of Sociology, and Contemporary Sociology, and has won awards from the American Sociological Association section on Science, Knowledge, and Technology, and Honorable Mentions from the Theory section and the Comparative-Historical Sociology sections.

RT @antievictionmap: TODAY, we launch The Tenant Power Toolkit, a legal tool that gives tenants more time to organize. Made with @StrikeDeb…

As a grad student it feels like you’re yelling into the void and no one is yelling back, until suddenly you’re not. This type of recognition is so meaningful and transformative for early career scholars. I’m so grateful for everyone who has supported my work to get to this point

Still in awe and feeling so humbled by how much recognition my work got this #ASA2022. ☺️🎉🖤 Not pictured: - Honorable mention from the Theory section for Best Student Paper - Robert Dentler Award for Student Achievement from SPPS section for Counterpoints https://t.co/MuzBOInR4V 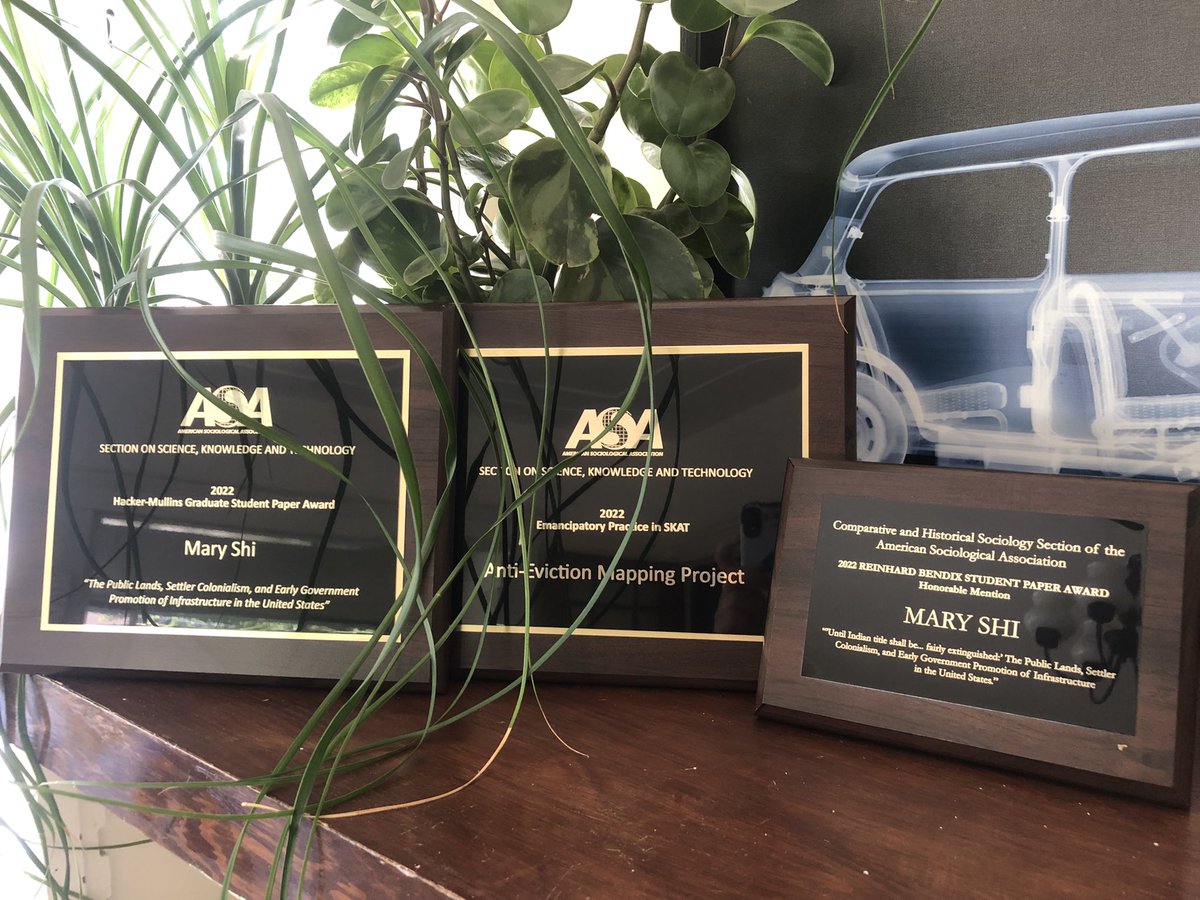